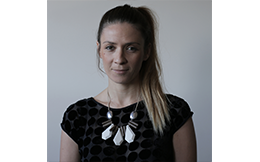 Chloe Rickard is one of Australia’s most dynamic and innovative comedy Producers. A Partner and Head of Production at Jungle, she has produced two seasons of Here Come the Habibs (Nine Network), No Activity (Stan’s first original commission) and Soul Mates (ABC/NBC Universal), along with The Moodys, A Moody Christmas, Elegant Gentlemen’sGuide to Knife Fighting, and over 200 television commercials.

She is currently developing the feature film The Murderous Urges of Ordinary Women and the dramedy series Holy Cow, both funded by Screen Australia.

Chloe is a recipient of Screen Australia’s Enterprise Growth program with the Van Vuuren Bros.

Chloe recently gained her Masters of Screen Arts & Business from AFTRS, in which she was awarded the Foxtel New Media Innovation Prize and is a member of the Screen Tasmania Advisory Board, as appointed by the Minister for the Arts.

Partner and Head of Production