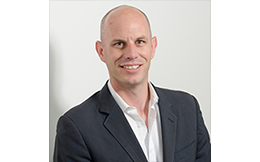 Chris started his career at the BBC in London, working across a number of production roles and programs, varying from Top of the Pops and The Generation Game, to Match of the Day and Westminster Live. He emigrated to Australia in 2000 and worked at the ABC in a number of senior roles across Drama, Entertainment and Comedy.

Chris was promoted to Head of Production in 2005 responsible for the physical production of the entire ABC TV slate, over 2500 hours of content annually. In 2008, Chris took on the role of Head Business & Operations for ABC Television, and as well as maintaining responsibility for physical production, he took on additional responsibilities including the financial management, business affairs and scheduling and broadcast operations of ABC TV.

In 2011, Chris moved to the independent production sector as Managing Director of Matchbox Pictures. He has led the company through a sustained period of growth, generating significant production output across Australia and Internationally. Recent credits include Glitch (ABC), Wanted (Seven), Hyde & Seek (Nine), Secret City (Foxtel) and The Real Housewives of Melbourne (Foxtel)