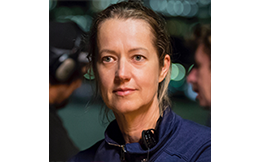 Kate Dennis is known for setting up one of Australia’s most successful and critically acclaimed series, Offspring, now in its seventh season. She has set-up six TV dramas in the UK and Australia, including Channel Ten’s The Alice and Party Tricks, and BBC’s Rescue Me.  Her most recent set-ups in Australia are upcoming series Harrow for Hoodlum Entertainment, and the six-part thriller Secrets & Lies, which was remade in the US by ABC. After Secrets and Lies, Kate made the move to the US, with her episodic work including The Handmaid’s Tale, Heathers, Damnation, The Tick, GLOW, I’m Dying Up Here, Preacher, Fear The Walking Dead, Turn: Washington’s Spies, Sleepy Hollow, Suits, and The Mindy Project. Kate recently received an Emmy Award nomination for Best Direction for her episode of The Handmaid’s Tale, “The Bridge”. Kate’s Australian TV episodic directing credits include Rake, Miss Fisher’s Murder Mysteries, The Time of Our Lives, Big Sky, Rush, The Secret Life of Us, Love My Way, Twisted Tales, and MDA.  From 1997 to 2002 Kate worked in London, where she developed two features (with Polygram), co-wroteSuperstition (Holland/UK) starring Charlotte Rampling, and directed second unit on Buffalo Soldiers (starring Joaquin Phoenix). In 2007 Kate was nominated for an ADG Award for Love My Way, and was nominated again in 2012 for Rake, and in 2015 for Secrets & Lies. Kate is currently attached to the feature film Almost French (Producer: Tim White), which Kate adapted from the best-selling memoir by Sarah Turnbull.  Kate began her career as a camera assistant and later script supervisor on movies including Priscilla Queen of the Desert, Babe, At Play in the Fields of the Lord and Cliffhanger.

*Via Skype* They have a great eye for narrative that strikes at the public pulse, know their way around Hollywood and are the lynchpins in some of the most compelling shows gracing our screens. Both these screen dynamos have shared an exceptional year and an exhilarating road getting there. From Australia to LA and back […]