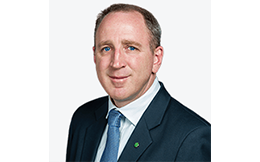 Luke has a background in small business and is dedicated to creating opportunities for local job-seekers and ensuring support for the businesses that employ them.  Luke enjoys fishing and playing touch football however, since being elected in 2013, if he has any spare time he enjoys spending that time with his wife Louise and their three sons.

Following last year’s Federal Election the Prime Minister asked Luke to take on the role as Chair of the House of Representatives Standing Committee, Communications and The Arts.  Again Luke’s interest in ensuring sustainable industries was front of mind when the Committee called for submissions to its inquiry into Australian Film and Television industry.  The Committee wanted to hear how Australian independent filmmakers, and major film and TV companies can expand and better compete for investment with producers and multi-platform production companies from overseas.  This they have done since the beginning of the year and the report into that inquiry is in its final stages of drafting at this time.

·         Born Brisbane, Qld (noting both his parents and grandparents were born in Australia

Luke Howarth is the Chair of the House of Standing Committee on Communications and the Arts, which has been conducting an inquiry into the growth and sustainability of the Australian screen industries. As the Committee is poised to report, Mr Howarth will provide an update on the inquiry and what he has learned about the […]