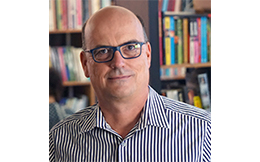 Chris Hilton is one of Australia’s most prolific and award winning factual producer/ directors who has made films across a broad spectrum of subjects for the world’s major broadcasters.  Chris’ recent Executive Producer credits include: Afghanistan:Inside Australia’s War (winner of the 2016 NSW Premier’s History Award Media Prize), Todd Sampson’s Body Hack, The Real Mary Poppins, Australia: The Time Traveller’s Guide, My Brother the Serial Killer, A Traveller’s Guide to the Planets, Miracles, The Voyage of the Courtesans, Seduction in the City, and the 2013 RealScreen Award nominated The Grammar of Happiness. Chris serves as a Documentary Councillor for Screen Producers Australia and won the 2014 Stanley Hawes Award for his outstanding contribution to the documentary industry in Australia.

Chris will be hosting a Roundtable at this year’s SCREEN FOREVER Conference.

This session will explore issues around the role of the independent sector in screen production ecologies in Australia, Canada, and the UK. The kinds of government measures that are in place to support the sector, their impact on the quality of content, the threats to regulation from borderless digital disruption, recent developments in these countries, […]