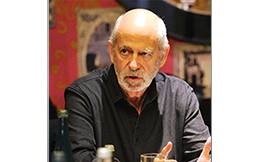 Olsberg•SPI is a leading international strategy consultancy specialising in the creative industries. Chairman Jonathan Olsberg has built a reputation as a strategic adviser at the highest levels of media, business and government.

The company’s clients include public and private sector organisations, around the world, requiring insightful and robust advice, studies and reports. SPI specialises in the screen production scene, having carried out many studies including the creation of incentives; evaluating the economic impact of the sector and strategies for film agencies. Clients also include individual businesses operating along the various value chains of these industries, with Jonathan specialising in strategic business planning and advice. SPI has been involved in many Australian assignments over the last 20 years and has spoken at several Screen Producers Association conferences in the past.

Jonathan brings to each assignment 35 years of experience as consultant, producer, distributor and international sales agent, in London and New York. His first career was finance, as an investment banker in the City of London and on Wall Street. He is a member of BAFTA, The British Screen Advisory Council, The Creative Industries Federation and The European Film Academy.

Ones To Watch Business Plan MasterClass

Jonathan Olsberg is the founder and chairman of a successful international business specialising in strategic advice for the creative industries with particular experience in the screen industries. Jonathan started the business 25 years ago and has grown it into a global enterprise servicing clients in North and South America, the United Kingdom, Europe, Africa, India, […]

This session will explore issues around the role of the independent sector in screen production ecologies in Australia, Canada, and the UK. The kinds of government measures that are in place to support the sector, their impact on the quality of content, the threats to regulation from borderless digital disruption, recent developments in these countries, […]