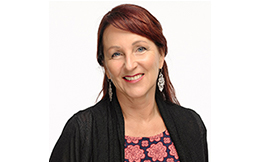 With more than three decades experience in the Australian production industry, Deb Cox has been responsible for originating, writing and producing some of Australia’s most iconic screen content.

As part of CoxKnight Productions, with Andrew Knight, Deb co-created and wrote three series of the much-loved ABC series SeaChange and the drama series CrashBurn and developed the children’s series, Worst Best Friends.

In 2016 Deb was jointly-awarded the Jill Robb Award for Outstanding Leadership, Achievement and Service to the Victorian Screen Industry.