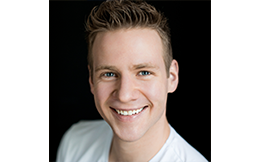 Josiah Brooks (aka Jazza) is a Youtube star, television presenter (with his own show on national television in Australia) and an internationally published author. He entertains on his Youtube channel Draw With Jazza, which has over 2 million subscribers, with art themed content such as art challenges, using unusual materials like correction fluid and 3D pen to create masterpieces, painting in Virtual Reality, teaching art, digital and traditional, and discussing topics like motivation and working as a professional in the arts. He builds positivity, selfesteem and skill in his viewers. He has a highly engaged community, with a monthly art competition that has thousands of entries each month.

Jazza has built a small empire of successful businesses, from the YouTube channel, selling ebooks and digital resources, art prints, merchandise and has his own top selling App ‘Arty Games’.

He makes art an adventure playground for his audience encouraging their creativity and keeping them engaged in a two way conversation, with live streams, questionnaires and competitions. Jazza’s likeability in front of the camera is a major feature in the channels fast growth and success.