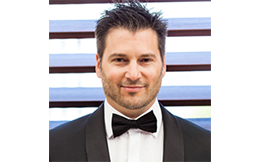 Josh will be hosting a Roundtable and Ready, Steady, Pitch! Session at this year’s SCREEN FOREVER Conference.