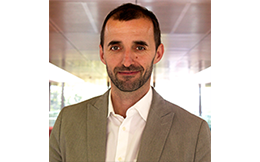 Neil Peplow is the Chief Executive Officer of the Australian Film Television & Radio School. For the third year running, AFTRS has been rated as one of the world’s top international film schools by The Hollywood Reporter.

Neil Peplow was most recently the Chief Operating Officer at the Met Film School in London at Ealing studios, a role that saw him overseeing the organisation’s education and training programs spanning degrees through to short courses.

With an MBA from the London Business School (2007), Neil has extensive experience as a business consultant within the media industry for clients that include: BBC Worldwide, Vue Cinemas, Intandem Films and Fallon Advertising. Neil has also lectured at the NFTS (UK) and for the European Union funded Media Business School. Director of Film at Skillset until 2011, he was responsible for developing and implementing “A Bigger Future 2, the UK films skills strategy for 2010 – 2013” before relocating to Australia, in mid 2011, to take up the position of Director of Screen, at AFTRS. While at AFTRS, Neil was a key member of the School’s leadership team and was instrumental in the development of the new BA (Screen) degree that commenced in 2015.

When Lawrence Levy received a call from Steve Jobs in 1994, to see if wanted to run Pixar’s business, his life altered. Over the next twelve years, Levy served as Pixar’s Chief Financial Officer, a member of its Office of the President and later as a member of its board of directors. He transformed Pixar […]

Reading the Audience’s Mind: The Art and Science of Biometrics

Biometrics is a technology that enables us to measure physiological and emotional responses to stimuli in real time. Panellists Neil Peplow, Penelope Thomas and Tom Lobban will discuss the benefits and impact this revolutionary technology will have on screen business, with a focus on methodologies best practice, several pilot studies and accompanying visuals. Speakers: Neil Peplow – CEO, […]