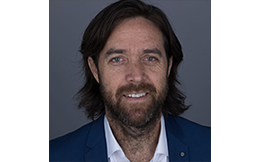 Scott is a hologram inside a hologram, suspended on a speck of dust, inside a sunbeam of light, in a vast cosmic arena. From a pro sports background to pioneering Augmented Reality (AR) and Virtual Reality (VR) since 2009, taking realities from “magic show” to functional use cases. He is currently leading Sydney based startup Humense which is building an AR/VR holographic human to human communication creator audience platform including open source software for multiple camera array and a production suite – for when you can’t get from A to B, or for 0 locations to infinity. At the core, Humense brings humans authentically into VR and AR aiming to replicate the “whites of the eyes”, “handshake conversation” – integral to engagement, trust, loyalty, persuasion and bonding.

Futurist Mark Pesce has described the times we are in as “the last days of reality”. Well beyond virtual or augmented reality, technology has now truly entered the realm of storytelling, character creation and experiences. Mike Seymour uses advanced technology to create computer generated humans, virtually indistinguishable from filmed reality; while Scott O’Brien seeks to […]