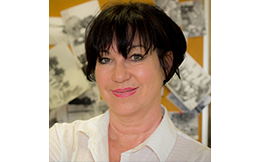 Vicki Madden is a Producer, Writer and Showrunner with over 20 years experience in the television Industry both in Australia and overseas.   She has worked as Writer and Show-runner on such shows as Halifax fp, The Bill, (UK), Trial & Retribution (UK) The Clinic (Ireland), Water Rats and K9 (UK) to name a few.  She was also the writer of the 90-minute true crime telemovie for the 9 Network and Playmaker media Blood Brothers.

Vicki runs her own Production Company, Sweet Potato Films, a small boutique film and TV company in Tasmania, her home state, and has just co-created, co-produced and written the critically acclaimed TV series, The Kettering Incident.

The Kettering Incident is a $15 million high-end drama for Foxtel, set in the dramatic landscape of Tasmania and is the first adult TV drama to be set there.  Critics worldwide have described it as ground breaking, bold and confident storytelling that subverts and elevates the crime genre.

TKI has enjoyed stunning award success both in Australia and overseas, winning the Special Jury Prize at the prestigious Series Mania Festival in Paris, with David Chase (Sopranos) as head Juror, four AACTA awards, the SPAA award for most outstanding telemovie or mini-series and two Logie awards for outstanding telemovie or mini-series.   Madden was short-listed for an Australian writer award (AWGIE) for excellence in writing and for the prestigious NSW Premier’s Literary Award.

TKI has been Foxtel’s highest rating drama ever and been critically acclaimed in Australia and is currently showing in the US and the UK to rave reviews.  BBC worldwide has distribution rights.

Vicki is currently developing a follow up to TKI with The Gloaming, a crime series set once more in her beloved state of Tasmania and hopes to have it in production in 2018.  She is also developing another of her shows with ABC in the US.

Vicki is represented by CAA in the US and United Artists in the UK.